My apologies for my first post being a Kickstarter project, but our new non-collectible card game, Rocket Race, has been designed with the steampunk community firmly in mind.

The year is 1898 and Queen Victoria has declared that the British Empire shall land on the Moon. With the challenge laid, the powerful Leagues of Adventure immediately begin working on their Moon Rockets! 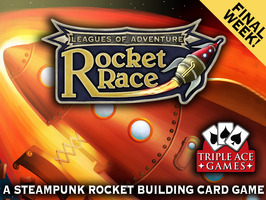 Build-Race-Win! Construct amazing moon rockets from an array of weird science devices in this fast paced card game for 2-6 players.

Join the Next Reality AR Community

Get the latest in AR — delivered straight to your inbox.

Good luck with your project!

Well this time you really came up with interesting thought. The best part of any steampunk game is there steampunk weapons and dresses.